View basket “Zero Hour (Hardback)” has been added to your basket.

The first day of the battle of the Somme, 1 July 1916, was the most devastating event of the First World War for the British army. In Zero Hour, 14 superlatively photographed panoramas (each one a four-page gatefold, opening to nearly 1 metre wide) show the Somme's major sites as they look today. Taken from the exact viewpoints of the front-line British troops as they began their advance towards the German trenches at 7.30 a.m., these hauntingly peaceful present-day views are annotated (in the handwritten military style of the time) to show the lethal German defensive positions at the moment of the attack.

Jolyon Fenwick's eerily compelling photographs are accompanied by detailed maps and vivid descriptions of the day's events, detailing their awful human loss: out of 116,000 British and Empire troops committed to the assault, by nightfall 57,470 had become casualties, and 19,240 were dead. Zero Hour is simultaneously a celebration of the renewing power of nature, and a powerful and unconventional reminder of the horrors of the past. 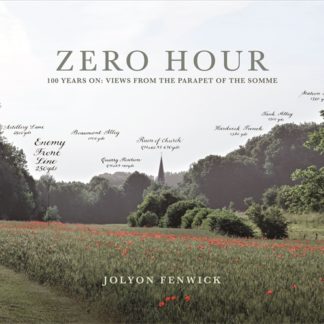