Next time you go for a countryside walk, make sure you pack a copy of John Wright’s The Forager’s Calendar. This beautiful, full-colour illustrated handbook takes you through the year month-by-month with the best wild food to look out for on your rambles.

John Wright is the country’s foremost expert in foraging with decades of experience, including as forager at the River Cottage. The Forager’s Calendar includes recipes, tips on kit, conservation advice and what to avoid.

Read on for John’s advice on what to look out for this month.

Anyone who collects wild food from field, hedgerow and seashore has a strong sense of season, anticipating each month for its special gifts. March, though in the shadow of winter, brings hope in the bright new shoots we see along roadsides. Nature is stirring at last and there is food to be found.

The most famous of those new shoots is Wild Garlic. Of all the green leaves (save Stinging Nettle) it is the most 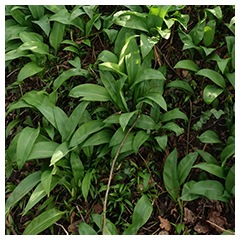 abundant. Not that one needs a great deal of the stuff as the flavour is strong and all it promises to be. But it is not just used for flavour, it is a green vegetable, giving it a greater range of uses – from salad to soups and from dolmas to curry. Despite having leaves which look a little like those of the poisonous Lily of the Valley, it is impossible to confuse because of its distinct garlic smell. 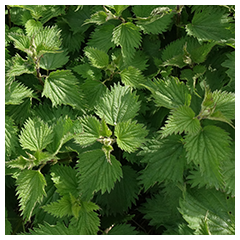 The Stinging Nettle is surely the first plant that everyone learns. Painfully so. I received my lesson in 1955 and it is not one I have forgotten as I re-learn it every year. No matter how careful you are with rubber-gloves, wellies and thick jumpers, the damnable things will catch you somewhere. Is it worth the discomfort, one must wonder? Allow me to convince you. Nettles are highly nutritious, with an entire health-food shop’s worth of minerals, vitamins, anti-oxidants, proteins and essential this-and-thats. They have a good flavour, one that is up there with spinach, and can be used in any dish requiring the latter. Except salad. It is a terrible salad ingredient. Finally, it is free and can be collected in heroic quantities with not the slightest twitch of the conservationist’s eyebrow.

New shoots are appearing, certainly, but it also the case that the sap is rising. This is of interest to foragers 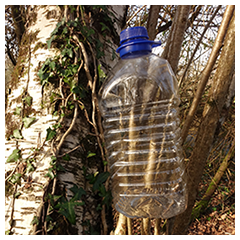 because of the lovely Silver Birch. Few wild foods are restricted to a less than two weeks each year, but Birch sap is one of them, usually the middle two weeks of March. A small hole is drilled in a decent size specimen and, if the sap is running, a ‘spile’ (a tapered spout with a hook on it) is hammered in and a container attached. If no sap flows, then the hole is plugged. The next day, anything up to four litres will have collected. Birch sap is a very, very dilute solution of sugar, plus a number of other organic compounds and tastes almost exactly like water. But it is very good water and worth collecting for that alone. However, most people make Birch sap wine with it (a complete waste of time, in my opinion) while others slowly evaporate off the water to leave a molasses-like syrup. It takes about 15 litres of sap to make 100ml of syrup, so it is notoriously hard work (though I cheat, by adding sugar once the sappy flavour becomes evident). Nevertheless, the entire enterprise is both exciting and strangely peaceful, so do try it at least once if only to raise your hedge-cred.