Announcing NYT Bestseller The Sum of Us by Heather McGhee 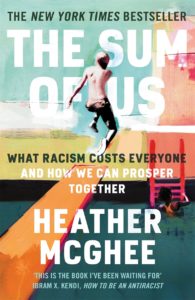 We are thrilled to announce that we have acquired former Demos president Heather McGhee’s The Sum of Us: What Racism Costs Everyone and How We Can Prosper Together, a deeply compassionate and meticulously argued investigation of the economic costs of racism.

It instantly made the New York Times bestseller list upon its US publication in mid-February and is currently at #2 in the NYT hardcover non-fiction chart. It’s been garnering rave press reviews and glowing praise across the board, from How to Be an Antiracist author Ibram X. Kendi (‘This is the book I’ve been waiting for’) and Black Lives Matter co-founder Alicia Garza (‘A must-read’), to Elizabeth Gilbert (‘A powerhouse of a book’) and George Saunders (‘Vital, urgent, stirring, beautifully written’).

Heather McGhee is an expert in economic and social policy. The former president of the inequality-focused think tank Demos, she has drafted US legislation, testified before Congress and appeared on numerous news discussion shows. She chairs the board of Color of Change, America’s largest online racial justice organization. Her TED Talk on how racism makes the economy worse has pulled in over 2 million views to date.

In The Sum of Us, McGhee sets out across America to learn why white voters so often act against their own interests. Why do they block changes that would help them, and even destroy their own advantages, whenever people of colour also stand to benefit? Their tragedy is that they believe they can’t win unless somebody else loses. But this is a lie, and McGhee marshals overwhelming economic evidence, and a profound well of empathy, to reveal the surprising truth: even racists lose out under white supremacy. As McGhee shows, it was racist lending policies that triggered the 2008 financial crisis, and there can be little prospect of tackling global climate change until its zero-sum delusions are defeated.

America’s racism is everybody’s problem. The Sum of Us is a heartbreaking, panoramic insight into the workings of prejudice – and a timely invitation to solidarity among all humans, ‘to piece together a new story of who we could be to one another’.

Pre-order your copy at Waterstones or from your local indie bookseller.