Annie Gray’s At Christmas We Feast: read an extract

‘A joy to immerse oneself in’ Andi Oliver

‘In the field of food history, Annie Gray leads the pack’ Jay Rayner 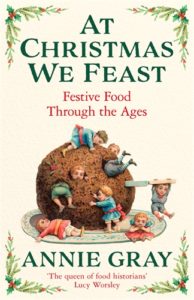 For many people Christmas wouldn’t be Christmas without a turkey and trimmings, pudding and brandy butter. But where do our traditions come from – and when modern writers ‘reinvent’ the Christmas meal, are they really doing anything so very different? Annie Gray presents a delectable trip through time, from the earliest mentions of gluttonous meals at Christmas to the trappings and traditions of the present day. Tracing the birth of the twelve-day celebration under Edward I to the restoration of holiday splendour under Victoria, At Christmas We Feast is organised by festive dish, and features classic recipes alongside vibrant cultural and historical context. From the familiarity of plum pudding and mince pies to the extravagance of boar’s head and brawn, At Christmas We Feast is stuffed full of recipes, doused with history and tradition, and sprinkled with the joy of the feasts of Christmas past.

Annie Gray is a historian, cook, broadcaster and writer specialising in the history of food and dining in Britain from around 1600 to the present day, conducting her research both in libraries and in kitchens. She has worked at Audley End amongst other historical kitchens, and gives lectures all over the country. She has presented TV history documentaries including Victorian Bakers and The Sweetmakers, and appears on BBC Radio 4’s The Kitchen Cabinet. She lives in East Anglia.

Read an extract below.

There are almost as many plum pudding recipes as there are recipe books: it is such a British staple that nearly every author has had a crack at one. For an excellent, conventional pudding, Eliza Acton’s Author’s Christmas pudding is hard to beat, but for the purposes of this book I tried a lot of them (avoid at all costs the wartime ones).

However, while lots were excellent, for something slightly different this banana-y riff on the theme is very good fun. It is also pure 1960s – earlier banana books (Many Ways with Bananas, for example, from 1900) tended towards Charlottes and fools, fritters and preserves, whereas Craig’s suggestions are gloriously bonkers from a modern perspective. Note that even as late as 1962, cooks are still advised to stone their own raisins. The instructions are exact on the ingredients, but assume the cook knows exactly what to do with a pudding cloth.

Peel and slice bananas thinly. Stir into mixture. Stir eggs into milk. Make hollow in centre of fruit mixture. Pour in liquid and stir until thoroughly mixed. Pack into a well-greased pudding basin to within an inch of top. Cover with greased paper, then with floured pudding cloth. Tie securely. Place in saucepan. Add boiling water to half-way up the sides. Steam for about 6 hours. Unmould onto heated platter. Decorate with a sprig of holly. Sprinkle with heated brandy, rum or whisky and set a match to it. Serve with banana sauce.

Mix all the dry ingredients. Chop or slice the bananas and add them, followed by the milk and egg. Mix well. Grease a basin or mould (it’s the 1960s, so a fluted ceramic number would be entirely appropriate), and pour in the mixture. Lay a disc of greased baking parchment on top, and tie over a cloth or foil.

If using a cloth, wet it, squeeze it out and flour lightly. Either way, put a fold in the cloth or foil to allow for expansion. Tie firmly in place (you can just scrunch if foil), and place on a saucer or small trivet in a saucepan of boiling water. The water should be just over halfway up the bowl. Put a lid on the pan and boil for 6 hours, checking regularly in case it boils dry.

The recipe is intended to be boiled and served straight away, but it can also be made a couple of weeks in advance and reheated, in which case store it in a clean cloth somewhere cool and dry. Craig suggests a sauce of maple syrup and mashed banana, but this may be a step too far. 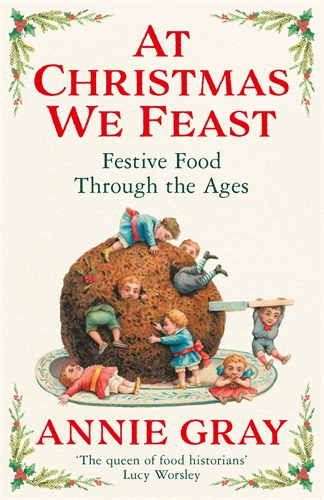 At Christmas We Feast

A celebration of Christmas through the table