Of Chris Irwin, Ireland's Equestrian magazine said 'he is more horse then human'. In France, his publisher says he's written the bible on horsemanship.

From standing-room-only university lectures, to training the trainers in horsemanship, therapeutic riding and equine assisted coaching, Chris Irwin is one of the most innovative leaders working with horses today.

Surprisingly, renowned horseman, personal coach and international best-selling author, Chris Irwin, did not grow up with horses and came from a difficult background.

Following an Olympic rowing career cut short by Canada's boycott of the 1980 games, at nineteen Chris found work at a racetrack in Seattle and immediately knew he had found his calling.

After just a few months at the track, Chris went back to Canada to explore driving with harness draft horses. Next he journeyed south to find work as a cowboy where it was the wild mustangs of Nevada that taught Chris how to work 'smart like a horse'. A decade later he had trained 18 U.S. National Champions with wild mustangs in both riding and driving competitions.

His difficult childhood developed his awareness for body language to know when to safely advance into, or retreat out of, a situation.

From equestrian training to executive coaching, mentoring for disadvantaged youth, resiliency workshops for 1st Responders and Military Veterans, to therapeutic, wellness programs, and even the prison system, the scope and impact of Chris Irwin's insights reach beyond the horse industry. 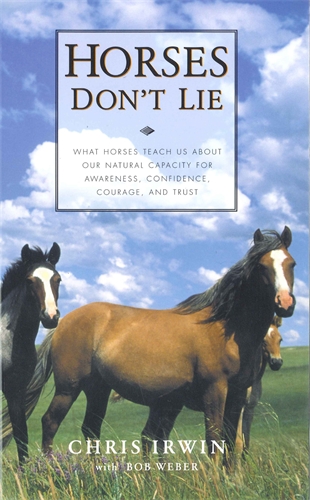