Jena Pincott is a science writer and the author of eight books, including Do Chocolate Lovers Have Sweeter Babies: The Surprising Science of Pregnancy and Do Gentlemen Really Prefer Blondes: The Science of Love, Sex & Attraction. Her titles have received starred reviews from Kirkus, Publisher's Weekly, and Library Journal and have been translated in 18 languages. A writer with a background in biology, she has contributed to Scientific American, Psychology Today, Nautilus, The Oprah Magazine, The Wall Street Journal, and Brain World, among other publications. She has appeared on CBS The Early Show, Good Morning America, Big Think, Science Fantastic, and many other TV, radio, and podcast programs.
Jena writes about science and psychology topics that fly under the radar, from microbes in breast milk to the mysteries of working memory; from the biology of attraction, in humans and other species, to the psychology of the inner critic; from cutting-edge developments in medical technology to the scientist-activists who are transforming women's health and medicine. She has a soft spot for the quirky stuff.
Jena is also the founder of DeepThink Decks (deepthinkdecks.com), which publishes tools (card decks) to help kids have fun developing their critical thinking skills. She holds a B.A. in Biology from Hampshire College in Amherst, MA with a dual concentration in media studies, and a M.A. from New York University with a focus on science in literature. She had been a senior editor at Random House and is a member of Science Writers of New York.
She lives in New York City with her husband and two STEM-loving daughters and writes science fiction whenever she gets a little free time. 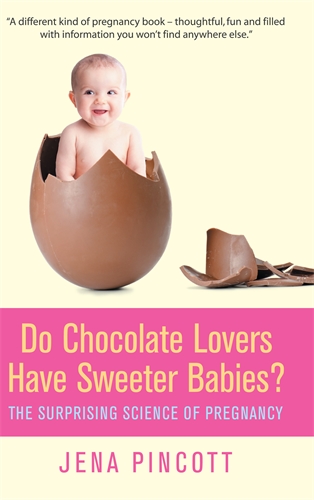 Do Chocolate Lovers Have Sweeter Babies?

Jena Pincott writes about the quirky, under-the-radar side of science and, while pregnant, found herself wondering how her baby's gestation might…