Michael J. Bird (31 October 1928, in London – 11 May 2001, in Great Shelford, Cambridgeshire) was an English writer.
In addition to several novels, he is best known for his television drama series for the BBC, usually set in the Mediterranean. The Lotus Eaters and Who Pays the Ferryman? were set in Crete, The Aphrodite Inheritance (1979) was set in Cyprus, and The Dark Side of the Sun took place on Rhodes. His final series for the BBC ended this practice, with Maelstrom, set in Norway.
Bird also wrote for the following series during his career: Danger Man, Special Branch, Quiller, The Onedin Line, Out of the Unknown, Arthur of the Britons, Secret Army and Warship.
Bird formed his own production company, named Gryphon Productions, and negotiated a number of co-productions with the BBC.
He was the author of The Town That Died: a Chronicle of the Halifax Disaster, published by Souvenir Press in 1962. 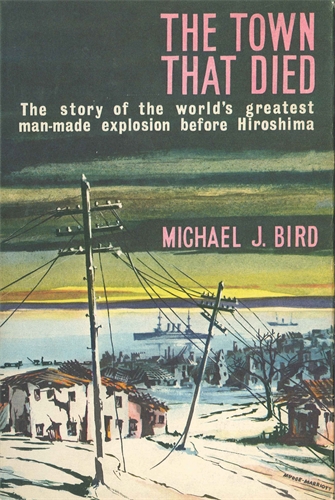 The Town That Died

An account of the greatest disaster ever to befall a Canadian city: the explosion of a vessel containing explosive in the harbour of Halifax in 1917.