Richard J. DeMartino, the co-author along with Erich Fromm and D.T. Suzuki of the little 1960's classic, Zen Buddhism and Psychoanalysis, died January 6 2013 in New York. DeMartino retired from the Department of Religion at Temple University as a senior associate professor in 1986 after teaching there for some 20 years.
Born in Harlem, New York on August 28, 1922, DeMartino graduated from Benjamin Franklin High School. He earned his bachelor's degree in social science at the City College of New York. He was recruited as a Phi Beta Kappa member into the U.S. Navy Language School and he served active duty at the Joint Intelligence Center in Pearl Harbor and as naval language officer with the U.S. force occupying Japan in 1945-1946. After his discharge, he served in Tokyo as historical consultant to the defense panel of the International Military Tribunal for the Far East.
During this period, he met D.T. Suzuki and began studying Zen Buddhism in Kita-Kamakura with him. DeMartino's studies continued during Suzuki's early years in the United States through the 1950s at the University of Hawaii, Claremont Graduate School, Harvard Divinity School and Columbia University as Suzuki's assistant.
DeMartino also studied with Zen thinker Shin'ichi Hisamatsu and translated many of Hisamatsu's writings into English. He participated in, and served as interpreter for, extended exchanges between Paul Tillich and Hisamatsu, which he edited for publication in the Eastern Buddhist as 'Conversations between Dr. Paul Tillich and Dr. Shin'ichi Hisamatsu.'
DeMartino's own treatments of the human situation and Zen Buddhism in his Ph.D. dissertation and several articles serve as a unique conceptual introduction to Zen Buddhism, on which he focused his academic career.
He is survived by his centenarian aunt who lives across the street, his extended family of cousins, his former students and his wife. 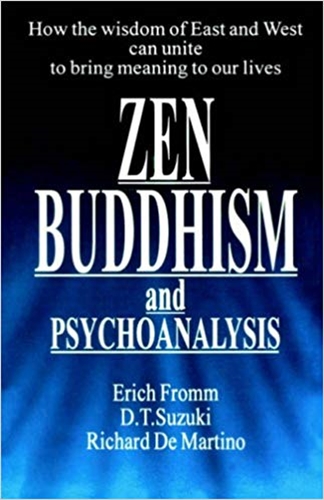 How the wisdom of East and West can unite to bring meaning to our lives.