Richard Hytner is Saatchi & Saatchi's Worldwide Deputy Chairman.
Following his No 1 brother to school, Hytner 2 never made it past the second 11 football team and played Lady Alice More (not the main man) in A Man for All Seasons. For four years, he studied the leading lights of Cambridge Footlights holding a spear. Lusting for centre stage, he became a serial advertising agency leader and in 2003 joined Saatchi & Saatchi as its Chief Executive for Europe, Middle East & Africa.
Aged 47, he concluded that he might, after all, be better suited to a leadership life in the shadows. Kevin Roberts, Capo Di Tutti Capi at Saatchi & Saatchi, agreed. So he made him Deputy Chairman. In 2011, he was appointed (not full but) Adjunct Associate Professor of Marketing at the London Business School.
He lives in London with his wife, Rosie and has two children, Joe and Sophie. 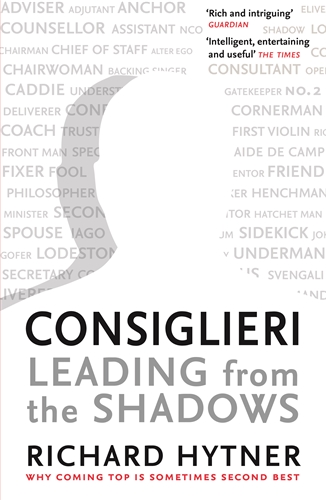 Consiglieri – Leading from the Shadows

How to make friends, influence people and be the (second) best you can be – by being second-in-command. Now available in paperback.