Sulak Sivaraksa (born 27 March 1932 in Siam) is a Thai social activist, professor, writer and the founder and director of the Thai NGO Sathirakoses-Nagapradeepa Foundation, named after two authorities on Thai culture, Sathirakoses (Phya Anuman Rajadhon) and Nagapradeepa (Phra Saraprasoet). He initiated a number of social, humanitarian, ecological and spiritual movements and organizations in Thailand, such as the College SEM (Spirit in Education Movement).
Sulak Sivaraksa is known in the West as one of the fathers of the International Network of Engaged Buddhists (INEB), which was established in 1989 with leading Buddhists, including the 14th Dalai Lama, the Vietnamese monk and peace-activist Thich Nhat Hanh, and the Theravada Bhikkhu Maha Ghosananda, as its patrons.
When Sulak Sivaraksa was awarded the Right Livelihood Award in 1995 for 'his vision, activism and spiritual commitment in the quest for a development process that is rooted in democracy, justice and cultural integrity', he became known to a wider public in Europe and the US. Sulak was chair of the Asian Cultural Forum on Development and has been a visiting professor at UC Berkeley, the University of Toronto, and Cornell. 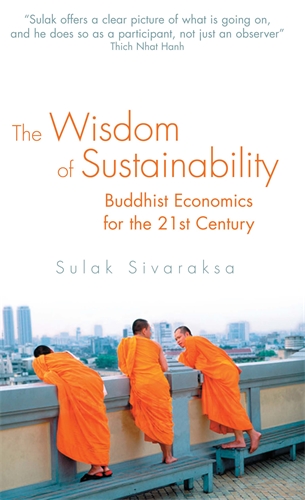 The Wisdom of Sustainability

Based on decades of thought, writing and political leadership The Wisdom of Sustainability outlines how economic success ought to be measured by Gross…