A Lamb to Slaughter ()

A young Dutch boy joins the German navy for adventure on the cusp of World War Two, but finds himself in over his head.

At the age of eighteen Jan Montyn was learning how to cross a ravine hanging from a rope; at nineteen he was serving in the Baltic on a German minesweeper; by the time he was twenty he was enduring the mud, snow and slaughter of the trenches on the Eastern front; before he was twenty-one he had lived through the hell of the Allied bombing of Dresden, played cat-and-mouse with the Russian army in a last-ditch stand on the banks of the Oder, retreated across Germany into the arms of Allied forces, escaped from a POW camp and joined the Foreign Legion. A few years later he was at war again, in Korea.
An adventure story on the grandest scale? Rather one of horrific experience and of a sensitive mind driven to obliterate the terrors of the past by a further dose of the same medicine.
Coming from a childhood hidebound by the most rigid structures of Dutch Calvinism, the young Montyn had seen the German Occupation of Holland and the wider opportunities it offered as the dawn of a new freedom. He had joined the German navy in a spirit of bravado, only to find himself trapped in the final, agonising throes of Germany's defeat in the Second World War and to live through the worst that men and machines can inflict on each other.
As an artist it affected him deeply, leaving him prey to hidden terrors and nightmares. From being a devotee of war he became a confirmed pacifist.
Written in collaboration with one of Holland's leading young novelists, A Lamb to Slaughter is a deep and haunting book of exceptional skill, a catalogue of strife and bloodshed whose message is peace and hope. Through years of restless pain Jan Montyn has struggled to come to terms with his baptism of horror – through debauchery, madness and the catharsis of remembering, through his art and the healing balm of the Buddhist faith.
His story is that of a man haunted by battlefields, who now seeks them out, not as a participant but for the essential tranquility he finds amid the aftermath of war. His book is an unforgettable literary experience, a moving evocation of the human paradox that transcends its immediate theme to assail our deepest sensibilities. 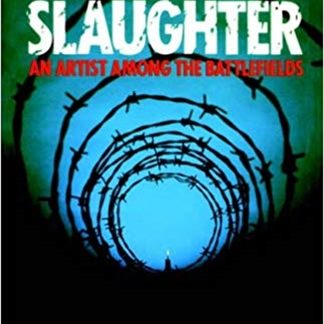