What are the limits of language? How to bring philosophy closer to everyday life? What is a good human being?

These were among the questions that philosophers wrestled with in mid-twentieth-century Britain, a period shadowed by war and the rise of fascism. In response to these events, thinkers such as Gilbert Ryle, J. L. Austin, Elizabeth Anscombe and Iris Murdoch aspired to a new level of watchfulness and self-awareness about language. Being vigilant about their words was their way to keep philosophy true to everyday experience.

A Terribly Serious Adventure traces the friendships and the rivalries, the shared preoccupations and the passionate disagreements of Oxford's most brilliant thinkers. Far from being stuck in a world of tweed, pipes and public schools, the Oxford philosophers drew on their wartime lives as soldiers and spies, conscientious objectors and prisoners of war in creating their greatest works, works that are original in both thought and style, true masterpieces of British modernism.

Nikhil Krishnan brings his knowledge and understanding of philosophy to bear on the lives and intellectual achievements of a large and lively cast of characters. Together, they stood for a compelling moral vision of philosophy that is still with us today. 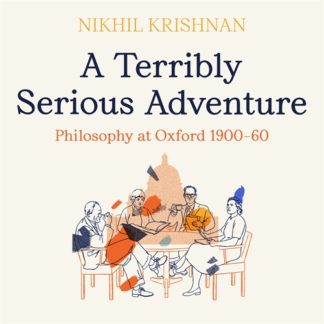