Love it or hate it, the exclamation mark has been with us from Beowulf to the spam email – an enthusiastic history for language lovers!

Few punctuation marks elicit quite as much love or hate as the exclamation mark. It's bubbly and exuberant, an emotional amplifier whose flamboyantly dramatic gesture lets the reader know: here be feelings! Scott Fitzgerald famously stated exclamation marks are like laughing at your own joke; Terry Pratchett had a character say that multiple !!! are a 'sure sign of a diseased mind'. So what's the deal with ! ?

An Admirable Point recuperates the exclamation mark from its much maligned place at the bottom of the punctuation hierarchy. It explores how ! came about in the first place some six hundred years ago, and uncovers the many ways in which ! has left its mark on art, literature, (pop) culture, and just about any sphere of human activity – from Beowulf to spam emails, ee cummings to neuroscience.

Whether you think it's over-used, or enthusiastically sprinkle your writing with it, ! is inescapable. 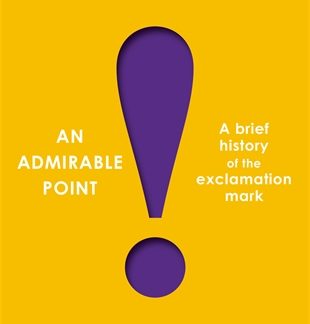 You're viewing: An Admirable Point (Hardback) £12.99
Add to basket