Astonish Me! is an adrenaline-charged rollercoaster through history's seismic first nights, exploring how individual artists can change and shape the story of culture – and allow us to see ourselves in new ways.

It tells of times when 'the air between people seems to alter' as art achieves profound change, across the globe and across history.

Dominic Dromgoole has created a radical and fresh canon. He begins in New York in 1963, as Lorraine Hansberry remakes American theatre and a nation's perception of race. And then, as the lights go up, we find ourselves in Renaissance Florence, watching Michelangelo's David being hauled into the Piazza della Signoria. The dust settles and we are transported to the birth of theatre in fifth-century Athens – and then to Paris to meet with Diaghilev and Stravinsky for the Rite of Spring. We witness kabuki's creation, as a radical women's performance, in Kyoto; the Sex Pistols shattering Thatcherite Britain at Manchester's Free Trade Hall; and watch as Hitchcock directs Psycho. 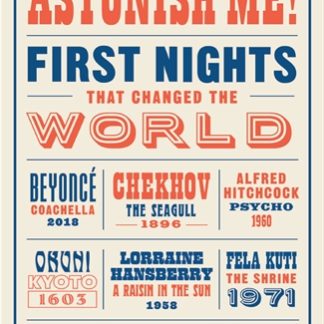