A major new history told from all sides, to coincide with the sixtieth anniversary of the armistice in the Korean War.

In this blockbusting trade debut, distinguished American professor Sheila Miyoshi Jager interweaves international events and previously unknown personal accounts to give a brilliant new history of the war, its aftermath and its global impact told from American, Korean, Soviet and Chinese sides. This is the first account to examine not only the military, but the social and political aspects of the war across the whole region – and it takes the story up to the present day: for the current wrangles are part of a conflict that has been ongoing for more than seventy years.

Drawing on newly accessible diplomatic archives and reports from South Korea's Truth and Reconciliation Comission, Jager not only analyses top-level military strategy but also depicts on-the-ground atrocities committed by both side that have never been revealed. The most accessible, up-to-date and balanced account yet written, rich with maps and illustrations, Brothers at War is the thrilling and highly original debut of a historian comparable to Max Hastings or Antony Beevor. It will become the definitive chronicle of the struggle's origins, aftermath, and global impact for years to come.

As North Korea enters the headlines again on the 60th anniversary of the armistice, this book provides a vital and comprehensive account of a war between brothers that shaped the current crisis.

'I entered the prison and walked around and discovered the corpses; they were black and covered with flies. I couldn't believe how cruelly these civilians were killed. I thought that it didn't matter whether this was done by the Communists or by our own troops — it represented the sorrow of a weak people, the tragedy of a civil war.' Yi Chun-yong, a South Korean prison guard recalls a massacre scene at Taejon prison in 1950 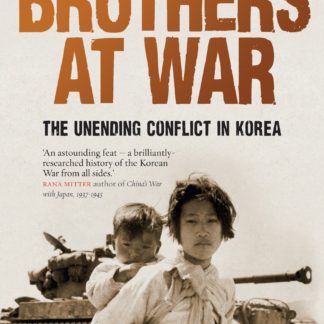