Chariots of the Gods (Epub)

A groundbreaking work of speculation into the mysteries of the universe.

All over the world there are fantastic ruins and objects that cannot be explained by conventional history, archaeology or religion. In the ground-breaking Chariots of the Gods, Erich von Daniken provides answers to these questions…why do religious texts often refer to Gods who descend from fiery chariots? Why do modern space launch sites look like constructions on the plains of Nazca in Peru? Was God an astronaut?

By looking at human history and the ruins of ancient civilisations with an open mind, Erich von Daniken offers a new solution to these eternal mysteries in Chariots of the Gods. Why, for instance, do the world's sacred books describe Gods who came down from the sky in fiery chariots and always promised to return? How could an ancient Sanskrit text contain an account which could only be of a journey in an alien craft? Compare photographs of American space centre launch sites to the constructions on the plains of Nazca in Peru.

In order to understand the mysteries which Erich von Daniken has catalogued we must go back to these ancient relics with an open mind. We must call in the resources and experience of sciences other than archaeology. Chariots of the Gods is a provocative attempt to explain some of the universe's most interesting mysteries. Erich von Daniken has spent a lifetime gathering evidence to prove that, before the dawn of recorded history, our ancestors were visited by an alien race. Erich von Daniken was responsible for popularising the ancient astronaut hypothesis of human development. Orthodox historians have been sceptical but a vast public have been drawn to his ideas by instinctive interest and wonder. His 26 books have sold over 60 million copies in over 40 languages. 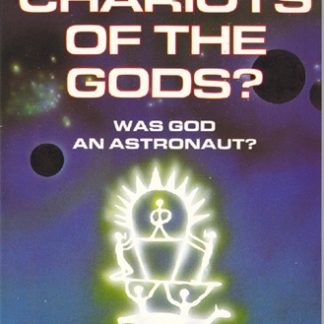