A history of poker set against the author's own experience of playing on the professional circuit.

Cowboys Full traces the story of poker from its roots in China, until Americans took what was a French parlour game and turned it into a national craze by the time of the American Civil War. Poker has been inextricably linked with American history ever since. It has been played by numerous presidents (Richard Nixon financed his first campaign office through his poker winnings) and has been used as a political tool to explain policy, for networking and to negotiate treaties.

Poker echoes how we conduct wars and do business: cheating and bluffing, leveraging uncertainty, managing risk and reward. In the past poker was thought to be a cheater's game but it has since become a mostly honest contest of cunning, mathematics and luck. It is the world's, and cyberspace's, most popular card game and has had an immense impact on popular culture – McManus explores its portrayal in novels, movies and plays.

Combining colourful history with the author's own personal experience of the professional tour Cowboys Full introduces the reader to all the major forms of poker, the game's most notorious players and demonstrates how poker has informed military, diplomatic and business life for centuries. 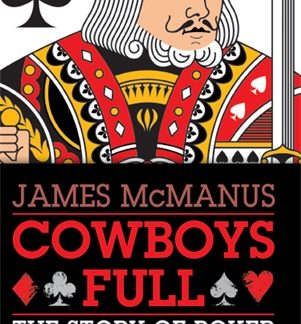