Destiny in the Desert (B Format Paperback)

A unique history of the road to El Alamein – and how the bloody battle that followed decided the outcome of the Second World War. A perfect gift for Father's Day.

It was the British victory at the Battle of El Alamein in November 1942 that inspired one of Winston Churchill's most famous aphorisms: 'This is not the end, it is not even the beginning of the end, but it is, perhaps, the end of the beginning'. And yet the significance of this episode remains unrecognised. In this thrilling historical account, Jonathan Dimbleby describes the political and strategic realities that lay behind the battle, charting the nail-biting months that led to the victory at El Alamein in November 1942. It is a story of high drama, played out both in the war capitals of London, Washington, Berlin, Rome and Moscow, and at the front in Egypt, Libya, Tunisia, Morrocco and Algeria and in the command posts and foxholes in the desert.

Destiny in the Desert is about politicians and generals, diplomats, civil servants and soldiers. It is about forceful characters and the tensions and rivalries between them. Drawing on official records and the personal insights of those involved at every level, Dimbleby creates a vivid portrait of a struggle which for Churchill marked the turn of the tide – and which for the soldiers on the ground involved fighting and dying in a foreign land.

Now available in paperback in time, Destiny in the Desert, which was shortlisted for the Hessell-Tiltman prize 2012-13, is required reading for anyone with an interest in the Desert War. 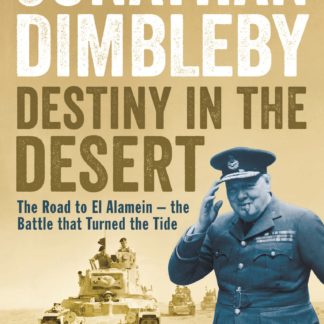 You're viewing: Destiny in the Desert (B Format Paperback) £12.99
Add to basket