Growling Over The Oceans (Epub)

The Avro Shackleton was a formidable machine with its Griffon engines producing the characteristic grumble that gave the aircraft one of its nicknames, the Growler. This book contains stories from the men for whom the aircraft became a way of life. Combining memories and anecdotes from crew members with archive material (including rare and previously unseen photographs) Growling over the Oceans is an intimate and vivid introduction to the world of the Shack.

In the last days of World War Two, the makers of the Lancaster bomber began to consider designing a new aircraft for Coastal Command. It eventually became the Shackleton. The men who flew and serviced the production version became fiercely proud of their aeroplane and its lack of home comforts. The Shackleton's ten man crews became a legend; their aeroplane was noisy, gloomy and demanded constant maintenance but it bred a aircrew who became inured to long, thundering and monotonous flight, and developed (even taking) a perverse pride in their misfortunes. The Shackleton served in anti-submarine warfare, maritime reconnaissance and colonial policing.

The Cold War ensured that the threat of unrestricted submarine warfare against British shipping kept the Shackleton on permanent alert for twenty years. It also became a troop transport, a bomber and a search and rescue aircraft when the need arose. From its first public flight in 1949 to the end of the Cold War when the Shackleton finally retired from service and entered history this book provides many reminiscences, some amusing, some serious, of those who flew in the Shack, the aircraft that struck more fear into its own crew than it did the enemy. 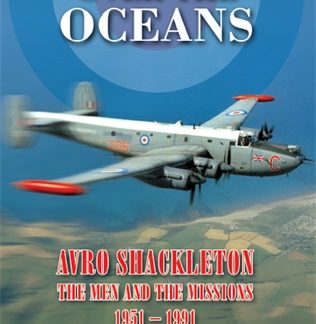 You're viewing: Growling Over The Oceans (Epub) £23.99
Add to basket