From the author of The War That Ended Peace: vivid accounts of the men and women who shaped history

What difference do individuals make to history? Are we all swept up in the great forces like industrialisation or globalisation, or is the world we inhabit shaped just as much by real people – leaders for example – and the decisions that they make? For better or for worse, the personalities of the powerful can affect millions of people and the future of countries: it matters who is in the driving seat, and who is making plans. Equally important: how is history itself made by those who keep the records?

In History's People Margaret Macmillan explores the lives of the great and lesser-known figures of the past: men, women, explorers, rulers, dreamers, politicians, observers, campaigners. She looks at the concept of leadership, from Bismarck to Franklin Delano Roosevelt, but also at the role of observers such as Babur, first Mughal emperor of India, and asks how explorers and visionaries such as Fanny Parkes and Elizabeth Simcoe managed to defy or ignore the constraints of their own societies. And, in doing so, she uncovers the important and complex relationship between biography and history, and between individuals and their times.

Like all the best history, this book will change the way you see the past, as well as your own times – and perhaps introduce you to some people you didn't know. 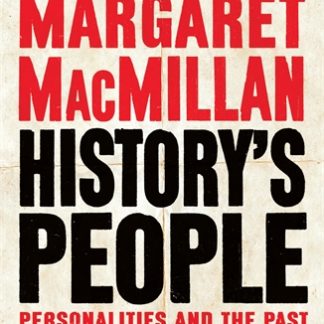 You're viewing: History's People (B Format Paperback) £9.99
Add to basket