How the Mind Forgets and Remembers (Epub)

A groundbreaking work by one of the world's foremost memory experts that offers the first framework to explain the basic memory miscues that we all encounter.

Daniel L. Schacter, chairman of Harvard University's Psychology Department, is internationally recognised as one of the world's authorities on memory, explains that just as the seven deadly sins, the seven memory sins appear routinely in everyday life, and why it is a good thing that they happen and surprisingly vital to a keen mind. The author explains how transience reflects a weakening of memory over time, how absent-mindedness occurs when failures of attention sabotage memory and how blocking happens when we can't retrieve a name we know well. Three other sins involve distorted memories: misattribution (assigning a memory to the wrong source), suggestibility (implanting false memories), and bias (rewriting the past based on present beliefs). The seventh sin, persistence, concerns intrusive recollections that we cannot forget – even when we wish we could. Daniel Schacter illustrates decades of research into memory lapses with compelling, and often bizarre, examples – for example, the violinist who placed a priceless Stradivarius on top of his car before driving off and the national memory champion who was plagued by absentmindedness. This book also explores recent research, such as the imaging of the brain that actually shows memories being formed. Together the stories and scientific findings examined in How The Mind Forgets and Remembers will reassure everyone from twenty-somethings who find their lives too busy to those in their fifties and sixties who are worried about early Alzheimers. Beautifully written, this original book provides a fascinating new look at our brains and what we more generally think of as our minds. 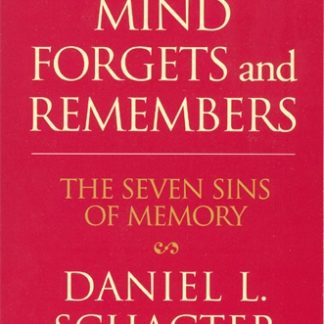 You're viewing: How the Mind Forgets and Remembers (Epub) £12.99
Add to basket