In 1971, at a time of enormous political and social change, two of the world's leading intellectuals, Noam Chomsky and Michel Foucault, were invited by the Dutch philosopher Fons Elders to debate the question: is there an 'innate' human nature independent of our experiences and external influences?

Their debate was one of the most provocative and original debates to have occurred between contemporary philosophers and serves as a concise introduction to their respective philosophical theories. While the debate began rooted in linguistics and theory of knowledge (the core interests of the two philosophers who are arguably the defining academic minds of the late twentieth-century) it became a much wider discussion, encompassing topics from history and behaviourism to creativity, freedom and the struggle for political justice.

This is an intellectually exciting record of a meeting between two important philosophers and it also serves as the best possible introduction to the essential concerns and ideas of contemporary philosophy. 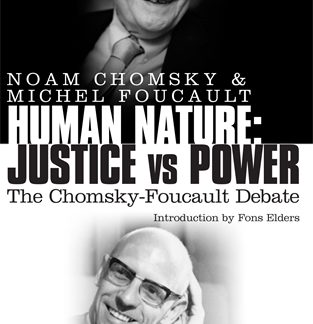 You're viewing: Human Nature: Justice Versus Power () £10.00
Add to basket