Riddle of the Labyrinth (B Format Paperback)

The full story of the race to decipher the world's greatest puzzle, now in paperback.

The decoding of Linear B is one of the world's greatest stories: from the discovery of a cache of ancient tablets recording a lost prehistoric language to the dramatic solution of the riddle nearly seventy years later, it exerts a mesmerising pull on the imagination.

But this captivating story is missing a crucial piece. Two men have dominated Linear B in popular history: Arthur Evans, the intrepid Victorian archaeologist who unearthed Linear B at Knossos and Michael Ventris, the dashing young amateur who produced a solution. But there was a third figure: Alice Kober, without whose painstaking work, recorded on pieces of paper clipped from hymn-sheets and magazines and stored in cigarette boxes in her Brooklyn loft, Linear B might still remain a mystery. Drawing on Kober's own papers – only made available recently – Margalit Fox provides the final piece of the enigma, and along the way reveals how you decipher a language when you know neither its grammar nor its alphabet as well as the stories behind other ancient languages, like the dancing-man Rongorongo of Easter Island. 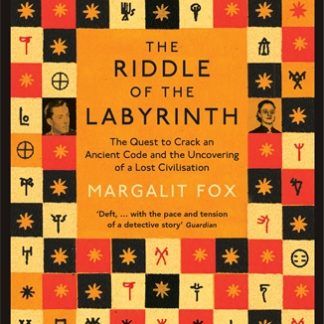 You're viewing: Riddle of the Labyrinth (B Format Paperback) £10.99
Add to basket