Today's marketplace is a war of ideas. Unless you stand for something you won't stand out. Nowadays anyone can copy your product, or even your business model. What they can't copy is your worldview, your attitude, your special way of doing things. So the war in the marketplace will be a war of ideas. The Big Idea maps this new territory and shows how big ideas make great companies. Unlike business models or the catchphrases of management gurus, a big idea is emotional. And unlike corporate ideologies, vision or brand, it is shared between customers and employees alike. Companies who have distinguished themselves with a big idea include: Virgin (not British Airways) John Lewis (not Debenhams) Apple (not IBM) Ikea (not MFI) Orange (not Cellnet) Customers don't just buy from these companies, they buy into them – they choose them not through economic logic, but emotional logic. As products and services become more and more similar, emotional logic will become the single most important business driver. The benefits of appealing to it can already be seen: Orange has a much lower turnover of customers than Cellnet and Ikea operates in over 23 countries while MFI only does business in Britain. A big idea isn't just a cute thing to have: it's the spark that makes places thrive while others just exist. 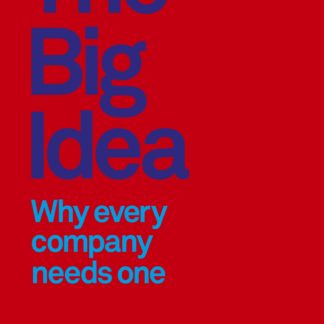