An eye-witness account of the Munich air crash of February 6th 1958, when 8 members of the Manchester United team were killed.

First published in 1983, an account of the Munich air crash of 1958 which killed eight of Manchester United's football team, updated with a postscript saluting the team of the 90s and paying a tribute to the late Sir Matt Busby.

Returning from a European Cup match against Red Star Belgrade, the plane carrying Manchester United's 'Busby Babes' stopped at Munich airport to refuel. On its third attempt to take-off in atrocious weather conditions the plane veered off the runway, crashed and burst into flames. 21 people died, 7 members of the legendary team among them (including Duncan Edwards), and Sir Matt Busby was rushed to hospital in critical condition. The greatest British football team of their generation was destroyed.

Frank Taylor was the only journalist on the plane that night to survive and during his hospitalisation wrote this book, revising it extensively 25 years later to include all the subsequent knowledge about the crash.

Two surviving members of the Manchester United players on the flight, Bobby Charlton and Bill Foulkes, would recover to play in Manchester United's European Cup victory in 1968. Fifty years afterwards Duncan Edwards is still remembered as having the potential to have been England's greatest player.

This is is the definitive, firsthand account of the crash that killed eight members of one of the greatest Manchester United teams in history. 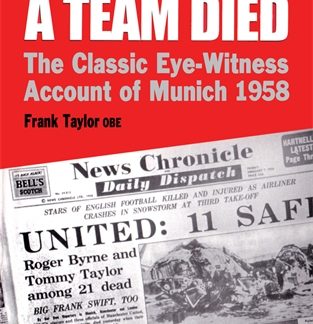