The Durrells of Corfu (Trade Paperback)

The recent TV award winning adaption The Durrells left its 7 million fans with questions: What happened to the family – and what took them to Corfu in the first place? This book has the answers

The Durrell family are immortalised in Gerald Durrell's My Family and Other Animals and its ITV adaptation, The Durrells. But what of the real life Durrells? Why did they go to Corfu in the first place – and what happened to them after they left?

The real story of the Durrells is as surprising and fascinating as anything in Gerry's books, and Michael Haag, with his first hand knowledge of the family, is the ideal narrator, drawing on diaries, letters and unpublished autobiographical fragments.

The Durrells of Corfu describes the family's upbringing in India and the crisis that brought them to England and then Greece. It recalls the genuine characters they encountered on Corfu – Theodore the biologist, the taxi driver Spiro Halikiopoulos and the prisoner Kosti – as well as the visit of American writer Henry Miller. And Haag has unearthed the story of how the Durrells left Corfu, including Margo's and Larry's last-minute escapes before the War. An extended epilogue looks at the emergence of Larry as a world famous novelist, and Gerry as a naturalist and champion of endangered species, as well as the lives of the rest of the family, their friends and other animals.

The book is illustrated with family photos from the Gerald Durrell Archive, many of them reproduced here for the first time. 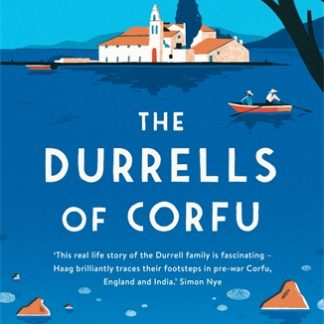 You're viewing: The Durrells of Corfu (Trade Paperback) £9.99
Add to basket