The Future Of Multi-Ethnic Britain ()

Britain has made some progress towards reducing racist violence and racial discrimination, but it still has a long way to go before it can claim to be a tolerant and just multi-ethnic society that is at ease with, delights in and profits from its rich diversity. This report by the Commission on the Future of Multi-Ethnic Britain describes and analyses the contemporary reality and suggests the way forward. The Commission was established by the Runnymede Trust and was composed of people with a long record of intellectual and political engagement with race related issues. They were drawn from a range of community backgrounds and walks of life and spent nearly two years working out a comprehensive agenda of action in such key areas as criminal justice, employment, health, the media, education, the arts, immigration, political representation, legislation and human rights. No other European country, nor even the United States, has produced such a report. All discussions of multi-ethnic Britain from now onwards will have to take this as their basis. Visit the website of the Runnymede Trust 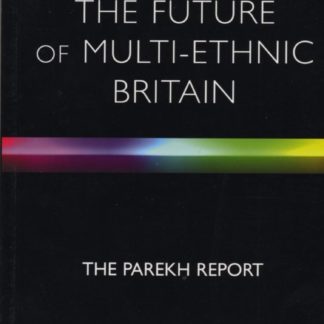 You're viewing: The Future Of Multi-Ethnic Britain () £14.99
Add to basket