The War that Ended Peace (B Format Paperback)

The definitive history of the political, cultural, military and personal forces which shaped Europe's path to the Great War – now in paperback.

WINNER of the International Affairs Book of the Year at the Political Book Awards 2014Longlisted for the Samuel Johnson Prize 2013
The First World War followed a period of sustained peace in Europe during which people talked with confidence of prosperity, progress and hope. But in 1914, Europe walked into a catastrophic conflict which killed millions of its men, bled its economies dry, shook empires and societies to pieces, and fatally undermined Europe's dominance of the world. It was a war which could have been avoided up to the last moment-so why did it happen?
Beginning in the early nineteenth century, and ending with the assassination of Arch Duke Franz Ferdinand, award-winning historian Margaret MacMillan uncovers the huge political and technological changes, national decisions and — just as important-the small moments of human muddle and weakness that led Europe from peace to disaster. This masterful exploration of how Europe chose its path towards war will change and enrich how we see this defining moment in our history. 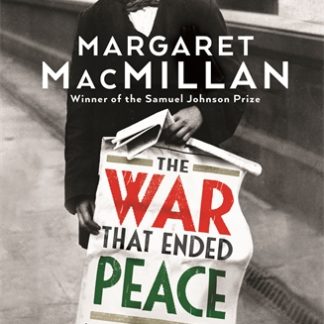 You're viewing: The War that Ended Peace (B Format Paperback) £14.99
Add to basket