In the tenth instalment of the bestselling Modesty Blaise series, Modesty and Willie Garvin must travel the world to save a friend and recover an item of immense value

* THE TENTH NOVEL IN THE BESTSELLING MODESTY BLAISE SERIES *

'The finest escapist thrillers ever written' THE TIMES

'Before Buffy, before Charlie's Angels, before Purdy and Emma Peel, there was Modesty Blaise' OBSERVER

Ms. Pendergast, a middle-aged nanny operating the criminal force 'El Mico', may not be your typical villain. But in the world of Modesty Blaise, who is? She and her two young charges, Jeremy and Dominic Silk, have made themselves the most potent underworld force in North Africa. In their latest triumph, they've stolen 'The Object' an item of immense value. However, they've also suffered their greatest setback – Bernard Martel, a top lieutenant, has double-crossed them and stolen it back.

Pursued and close to death, a delirious Bernard reveals to Modesty Blaise a series of obscure clues, setting her and Willie Garvin on a quest to recover The Object and rescue Tracy, Bernard's wife. From thrilling Tangier, to mysterious Marrekesh, to the grandeur of the High Atlas Mountains, Modesty and Willie stop at nothing in one of their most riveting and action-packed adventures yet. 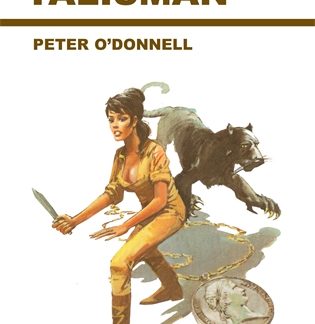 You're viewing: Xanadu Talisman (B Format Paperback) £8.99
Add to basket