Vesuvio is the golden Voyager, destined to journey through every cavern of depravity in the ancient world. It is a time when Rome was at its most decadent and throbbing with the muscle of slavery, the First Century A.D., an age of sensual adventure and unbridled sexuality. Pagan Voyager, the second part of the Voyager trilogy and sizzling sequel to Golden Voyager, follows Vesuvio, the virile young aristocrat, as he searches for his slave-girl lover, Miranda, in a bloody adventure of wild sensuality. Vesuvio follows Miranda across the Mediterranean to the Egyptian city of Alexandria where he falls into the clutches of the robber Charon. Subject to humiliating physical and mental depravities, Vesuvio is sold to a Jewish merchant in the ancient city of Antioch where he becomes the merchant's charioteer. Only with victory in a death-defying race can Vesuvio return to Rome, where he is forced to serve in the Villa Orgiasta, a notorious pleasure house. When he finally finds Miranda Vesuvio must plot her safe return to Italy, as well as finding a way to regain his own freedom. Rich in historical background and pulsing with unchained passions and erotic conquest, Pagan Voyager is a compelling adventure of forbidden love and cruel sacrifice amid the majesty and power of Rome for anyone who has enjoyed movies such as Spartacus or Gladiator. 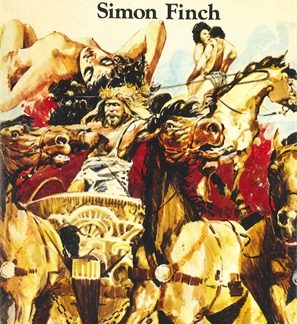