The Art of Logic (Ebook)

How to Make Sense in a World that Doesn't

A survival guide for our post-truth world using the timeless methods of logic, from a Royal Society Prize shortlisted mathematician

Emotions are powerful. In newspaper headlines and on social media, they have become the primary way of understanding the world. But strong feelings make it more difficult to see the reality behind the rhetoric. In The Art of Logic, Eugenia Cheng shows how mathematical logic can help us see things more clearly - and know when politicians and companies are trying to mislead us.

First Cheng explains how to use black-and-white logic to illuminate the world around us, giving us new insight into thorny political questions like public healthcare, Black Lives Matter and Brexit. Then she explains how logic and emotions, used side-by-side, can help us not only to be more rational individuals, but also to live more thoughtfully.

Clear-sighted, revelatory and filled with useful real-life examples of logic and illogic at work, The Art of Logic is an essential guide to decoding modern life.

The Art of Logic (Paperback)

How to Make Sense in a World that Doesn't

A practical, illuminating and timeless guide to thinking better, from a Royal Society Prize shortlisted mathematician - now in paperback

For thousands of years, mathematicians have used the timeless art of logic to see the world more clearly. In The Art of Logic, Royal Society Science Book Prize nominee Eugenia Cheng shows how anyone can think like a mathematician - and see, argue and think better.

Learn how to simplify complex decisions without over-simplifying them. Discover the power of analogies and the dangers of false equivalences. Find out how people construct misleading arguments, and how we can argue back.

Eugenia Cheng teaches us how to find clarity without losing nuance, taking a careful scalpel to the complexities of politics, privilege, sexism and dozens of other real-world situations. Her Art of Logic is a practical and inspiring guide to decoding the modern world.

Reviews for The Art of Logic

'Mind-expanding ... a meaningful contribution to creating a better society as well as happier conversations and relationships'

'With humour, grace, and a natural gift for making explanations seem fun, Eugenia Cheng has done it again. This is a book to savour, to consult, and to buy for all your friends. You'll think more clearly after reading this book, something that is unfortunately in short supply these days. I am buying several copies to send to heads of state.'

Daniel Levitin, bestselling author of The Organised Mind & A Field Guide to Lies and Statistics

'In an era awash with conflict, exploitation, tribalism and fake news, the "illuminating precision" offered by logic is important. Cheng harnesses the power of abstraction to explore real-life phenomena such as sexism and white privilege. She walks us through the grand terrain of logic, from axioms to proofs. And she reveals how to build arguments as long chains of logical implications - a "virtuosic and masterful" skill that, combined with intelligent emotional engagement, can cut through pervasive irrationality'

'A perceptive analysis of logic and its limitations ... Cheng is successful not only in helping readers think more clearly, but in helping them understand why others sometimes appear to be illogical. This book has the potential to help understanding and avoid confrontational arguments that serve only to entrench opposing views'

'We're thankful that someone like Eugenia Cheng is here; someone to eloquently and efficiently expound on concepts like logic and truth at a time when their very basis seems to come under attack ... We're forever on the lookout for someone to make mathematics both fun and accessible, and it looks like we've found that person in Eugenia Cheng'

How it Works Magazine

'A concert pianist, mathematician, polyglot and YouTube star, Cheng has carved out quite a niche for herself ... she brings an ebullient enthusiasm that's infectious'

Eugenia Cheng is Scientist in Residence at the School of the Art Institute of Chicago and Honorary Visiting Fellow at City, University of London. A concert pianist, she also speaks French and Cantonese, and is the author of The Art of Logic, How to Bake Pi and Beyond Infinity, the last of which was shortlisted for the 2017 Royal Society Science Book Prize. 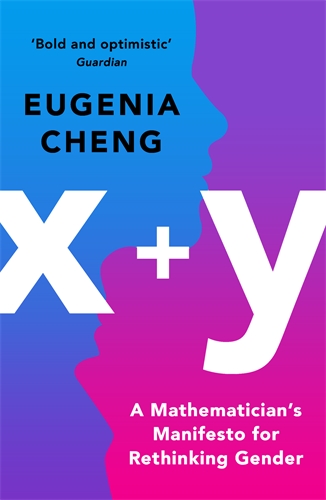 What if we could do the impossible and remove gender from the equation? 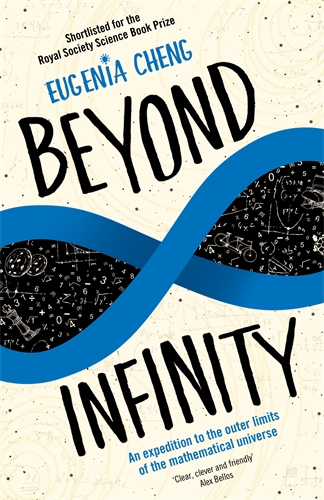 Inside the weird and wonderful world of infinity, from endless hotels to bottomless cookie-jars – now in paperback 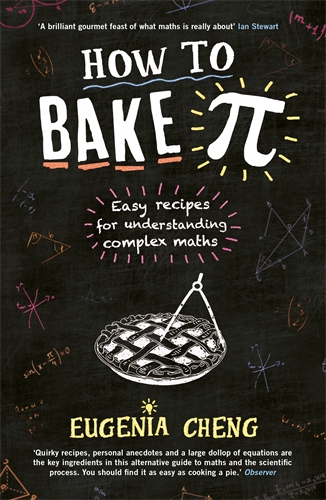 How to Bake Pi

Möbius bagels, Euclid's flourless chocolate cake and apple pi – this is maths, but not as you know it.In How to Bake Pi, mathematical crusade…